The mission of the Kennett Consolidated School District is to provide a quality education that increases the achievement of every student in order for all to become successful and thoughtful contributors to society.

"Bancroft Elementary School is dedicated to creating a safe and rewarding educational experience for all children. Our goal is to focus on student success by fostering a positive, accepting and supportive learning environment where students are proud of the work that they do each day."

"Greenwood Elementary School is committed to providing children an engaging and comprehensive education to support their success academically, behaviorally and socially. Greenwood students will experience education in a safe, welcoming, student-centered learning environment."

"Mary D Lang Kindergarten Center has a balanced educational program that is focused on the whole child with experiences designed to expand the mental, physical, emotional, and social development of every student."

"Here at New Garden Elementary School we are committed to providing a nurturing and supportive learning environment for students to grow and feel successful while providing an excellent instructional program to meet the individual needs of all students."

"We pride ourselves on meeting ALL students where they are and helping them grow as students and people. I promise you that our commitment to your child will never waver. Lets work together to ensure that KMS remains the best school for your child."

"KHS is a school that is rich in tradition. At the same time, we are committed to modernizing our learning opportunities today to prepare ALL of our students for tomorrow."

"KHS is very proud of our teams, coaches, and especially our student-athletes. They all do an outstanding job of representing KHS with hard work, dedication and sportsmanship both on and off the field."

"At Kennett High School, we hold our students to the highest of expectations both in and outside of the classroom. Together, we collaborate and communicate to ensure a positive learning environment where all students feel safe, welcomed, and inspired to improve each and every day...."

"At Kennett High School, we hold our students to the highest of expectations both in and outside of the classroom. Together, we collaborate and communicate to ensure a positive learning environment where all students feel safe, welcomed, and inspired to improve each and every day...." 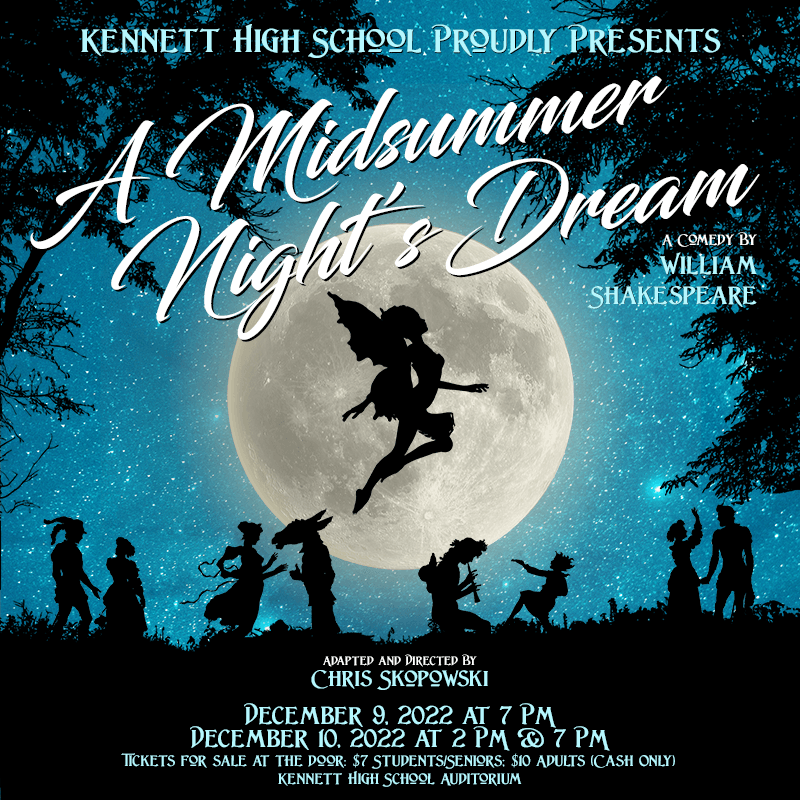 “The course of true love never did run smooth”

“Lord, what fools these mortals be!”

Tickets are $10 for adults and $7 for students and seniors and can be purchased at the door (cash only). Arrive early for best seat selection. Refreshments will be available in the cafeteria (also cash only).